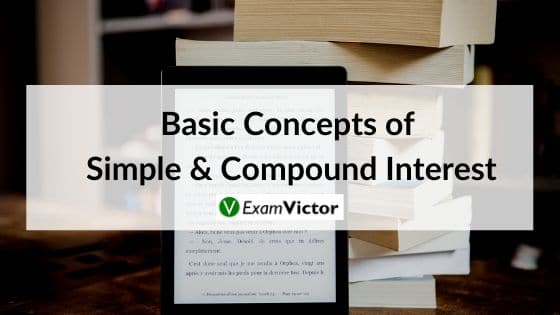 People can always find a use for money, so it costs to borrow money. Interest may be defined as the charge for using the borrowed money. It is an expense for the person who borrows money and income for the person who lends money. Interest is charged on principal amount at a certain rate for a certain period. For example, 10% per year, 4% per quarter or 2% per month etc.  Principal amount means the amount of money that is originally borrowed from an individual or a financial institution. It does not include interest. In practice, the interest is charged using one of two methods. These are:

These methods are briefly explained below:

Simple interest can be easily computed using the following formula:

A loan of Rs. 10,000 has been issued for 6-years. Compute the amount to be repaid to the lender if simple interest is charged at 5% per year.

By putting the values of P, i and n into the simple interest formula: The above procedure of computing compound amount is lengthy and time-consuming. Fortunately, a formula is available to compute compound amount for any number of periods. It is given below:

i = rate of interest

A woman has deposited Rs. 6,000 in a saving account. Bank pays interest at a rate of 9% per year.

Required: Compute the amount of interest that will be earned over a 12-year period:

In this blog post, we have explained the Concept of Simple and Compound Interest in detail. We have taken some examples which are also explained in depth to clarify the concept in the student’s mind. We hope you like our blog. Check here for related posts. And, do not forget to share your views in the comment section below.