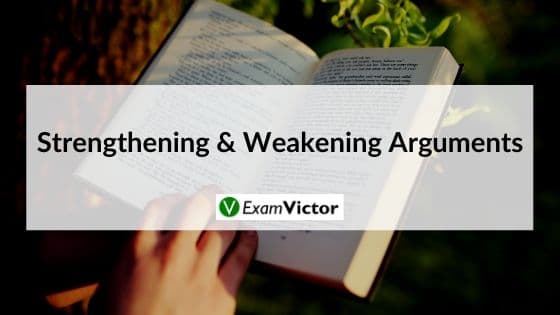 Once you have mastered the art of finding the central assumption of a critical reasoning problem, the next skill to focus on is identifying ways in which to Strengthening and Weakening Arguments. These questions present an argument, and then ask test-takers to identify the answer choice that, if true, would best strengthen or weaken that argument.

But before we get too deep into specifics, let’s take a step back and review the basics.

Why is an Argument?

The key to strengthening an argument is finding the answer choice that confirms that the central assumption is correct. This is generally done in one of two ways.

Read the sample question given below to get more clarity:

The cellular service quality has dropped significantly in India. Ten years ago, there were no instances of a call drop or no connectivity. There is also a decrease in the speed and reliability of service.

All of the following would tend to strengthen the conclusion of the argument above except:

1. The volume of connections handled by the Mobile operators has increased dramatically over the last ten years.

2. Unprecedented increases in the cost, as well as the scarce availability of spectrum for mobile services, have put severe pressures on the Mobile companies.

3.  Mobile services have diversified from carrying mere voice data to a whole range of internet data such as downloading, video-calling, data sharing, etc.

4. The opposition to negative externality of cellular radiation has obstructed increase of network services in response to the increasing subscriber base.

Understand the question carefully. The question is asking you look for an option that will weaken our conclusion. For that, you need to find the conclusion. The conclusion in the given argument is ‘The cellular service quality has dropped significantly in India.’

Now if we look at the option A, it is uprightly giving us a reason as to why there is a decline in the services. If the volume of the mobile connection subscriber increase in a dramatic way, and the service provider is not in a capacity to handle it perfectly, it will surely lead to mismanagement. And similar is the case with option B, as- if there is a scarcity of spectrum it will be difficult to give good services.

We are now left with option C and D. Option C says that as compared to the older times when the cellular companies were catering to only one kind of service whereas, now they have diversified their services. This option is weakening the main argument, which makes it the correct answer option.

Option D is also strengthening the conclusion as it says that due to the negative externality of the radiation, people are opposing it but they are not opposing the use of mobile phones, which means there may be less mobile towers in comparison to the increasing subscriber base.

In this blog post, we have mentioned how an argument can be strengthened and weakened. We have started with the basics by defining an Argument and then explaining questions related to it with more clarity. Hope you liked our post. Share your views in the comment section below.  For related posts click here.