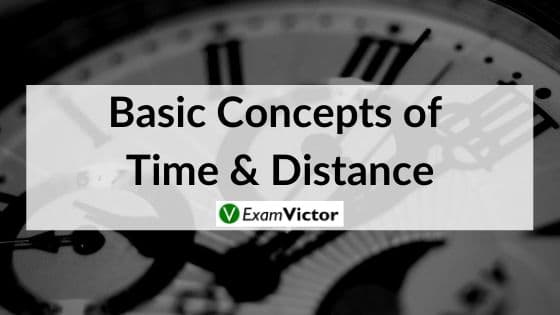 Speed is a very basic concept in motion which is all about how fast or slow any object moves. We define speed as distance divided by time. In this article, we will discuss the speed, time and distance aptitude questions. As this topic forms an integral part of every competitive exam, you cannot afford to miss this topic. This article will equip you to solve all time speed and distance word problems.

There is a relationship between speed, distance and time: Let us take a look at some simple examples of distance, time and speed problems.

Example 1. A boy walks at a speed of 4 kmph. How much time does he take to walk a distance of 20 km?

Now we can see that the direct application of our usual formula Distance = Speed * Time or its variations cannot be done in this case and we need to put in extra effort to calculate the given parameters.

Let us see how this question can be solved.

Suppose you and your friend decided to take your brand new red sports car out for a spin. Your car is capable of speeds up to 220 mph. You drove 45 miles in 1.25 hours. At the end of your trip, your friend tells you that your average speed during the trip is 36 miles per hour. You were appalled. You asked yourself, ‘How can a sports car have such a pitiful average speed?’ and tried to recall how much you paid for it. What is average speed anyway?

The average speed of an object is the total distance travelled by the object divided by the elapsed time to cover that distance. It’s a scalar quantity which means it is defined only by magnitude. A related concept, average velocity, is a vector quantity. A vector quantity is defined by magnitude and direction. For example, we might say that a car has an average speed of 25 miles per hour. Its average velocity might be 25 miles per hour due east.

Case 1: When the distance is constant Where x and y are the two speeds at which the same distance has been covered. Applicable when one travels at speed a for half the distance and speed b for other half of the distance. In this case, the average speed is the harmonic mean of the two speeds. On similar lines, you can modify this formula for one-third distance.

Case 2: When time is constant

Where x and y are the two speeds at which we travelled for the same time. Applicable when one travels at speed a for half the time and speed b for another half of the time. In this case, the average speed is the arithmetic mean of the two speeds.

Solution: Here, the distance for which Sheena travelled at the two speeds is the same.

In this blog post, we have provided the basic concepts of Time and Distance with the help of easy examples and detailed explanation. For post related to Linear Equation, click the given link.
Hope you liked this post.  Let us know your views in the comment section below.