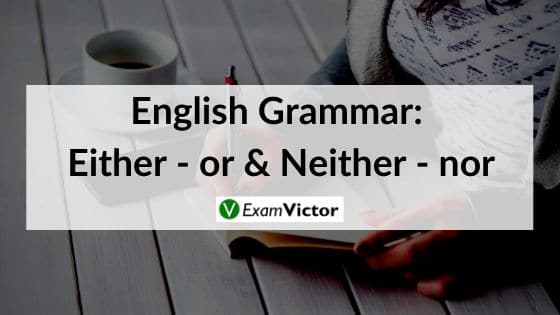 Have you ever had difficulties knowing when to use either and neither? How about nor and or?

If you have, don’t worry, you are not the only one. Even native speakers will sometimes get things like this confused! When you learn English, it helps to know little grammar tricks that help you tell the difference between words like these.

Either and neither can be used in several ways: adverbs, determiners, pronouns and conjunctions.

While ‘either’ has a positive connotation, ‘neither’ holds a negative significance. You will always find them paired up this way: either/or and neither/nor. These are the ways you can find them being used.

When we find them behaving like adverbs, both either and neither become linking words.
For example, I don’t like spinach. – Neither do I.

In the case of determiners, either and neither are positioned before the noun.
For example, The house has a door at either end.

For all those instances when either and neither behave like pronouns, the structure of the sentence would be:
either/neither followed by of + noun phrase
When they act as pronouns either means ‘one or the other’ while neither indicates ‘not one or the other’
For example, Both these roads go to Rome; you can go either way.

In all the cases in which we find “either” and “neither” as conjunctions, we also find them combined with “or” and “nor“.
either/or – They are used together to offer a choice between two things
For example, You can either call me at home or at the office.

neither/nor – When they’re paired up they negate both parts of a statement.
For example, Neither the blue one nor the red is available in size 4.

In this blog post, we have explained the correct usage of Either-or & Neither-nor with examples to clarify the concept. Hope you liked this post. For related post click the given link English Grammar: Adverbs