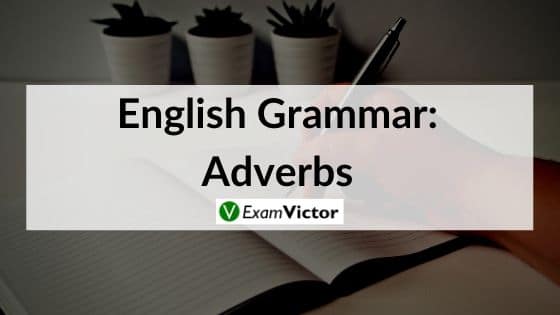 Adverbs are one of the basic elements of English Grammar. It is an important topic as adverbs are directly or indirectly part of almost all the competitive exams ranging from SSC CGL till CAT level. So, the concept of adverbs should be clear in your mind. The following post will help you to have a better understanding about it.

Adverbs are words that modify

He finally showed up for batting practice.
She has recently retired.

When to Avoid Adverbs

Ernest Hemingway is often held up as an example of a great writer who detested adverbs and advised other writers to avoid them. In reality, it is impossible to avoid adverbs completely. Sometimes we need them, and all writers use them occasionally. The trick is to avoid unnecessary adverbs. When your verb or adjective does not seem powerful or precise enough, instead of reaching for an adverb to add more color, try reaching for a stronger verb or adjective instead. Most of the time, you’ll come up with a better word and your writing will be stronger for it.

From the above explanation, we can clearly understand the definition of Adverbs, Kinds of Adverbs, Positioning of Adverbs and When, Where, How & Why to avoid Adverbs.
Hope you liked this post. For more posts related to English, click on the links mentioned below.
Adjectives
Gerunds, Infinitives & Participles