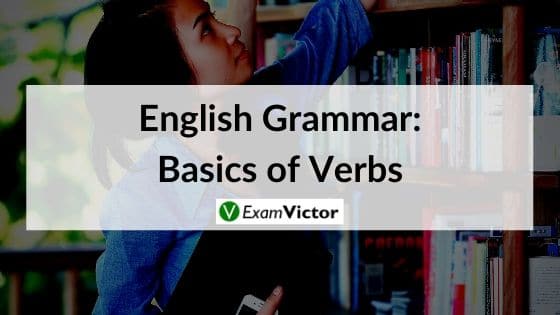 Verbs fall under English Grammar and are main parts of an English sentence. Verbs tell you what the subject of a sentence or clause is doing (or being). Verbs are conjugated according to person, number, gender, tense, aspect, mood, or voice.

Verbs are at the heart of sentences and clauses; they are indispensable to the formation of a complete thought. A verb can express a thought by itself (with the subject implied) and be understood.

Gloria walked across the room.
The shark swam menacingly close to the shore.

Even when used figuratively rather than literally, some verbs can still be considered action verbs.

The singer broke with tradition by shaking hands with his fans.

In this example, the singer didn’t really break anything, but the verb is still an action verb.

Conversely, nonaction verbs can indicate a state of being, sense, emotion, desire, possession, or opinion. The most common nonaction verb is to be.

I am a good person.
The baby felt cold without her blanket.
My mother loves me.
I have four tickets to the show.

Verbs change in form, or tense, to indicate whether the actions or states are occurring in the present (or are happening continuously), occurred in the past, or will occur in the future.

All the latter uses would require additional grammatical elements to form complete thoughts. To ensure good writing, it is important for verbs to be used consistently and in a logical sequence so that the time period being written about is properly understood. Verbs can also have up to five different forms: root, third-person singular, present participle, past, and past participle.

Among a verb’s many properties is the mood. A verb’s mood, sometimes referred to as a mode, can be either indicative, imperative, or subjunctive. The most common of these is the indicative mood. The indicative mood is used for statements of fact or opinion and to pose questions.

Every rose has its thorn.
A cat has nine lives.
Is the moon made of cheese?

The imperative mood is used to express commands. Subjects are often implied rather than expressed in sentences with imperative verbs. In the following examples, the subject you is implied:

Put that down!
Please exit the building in single file.

The subjunctive mood is used to express a verb with an action or state that is doubtful, imagined, conditional, desired, or hypothetical.

I wish you were here.

It is implied by this sentence that you are not actually here, but I wish that were not so. Were is in the subjunctive mood. Conditional verbs (which often appear with if/when statements) also receive a subjunctive treatment.

If I were a younger man, I would run three miles a day.

Were and would run indicate the subjunctive mood.

In this post, we have included all the basics of Verbs. Types of Verbs are explained in detail with examples. For related posts click here.
Also, share your comments in the given section below.