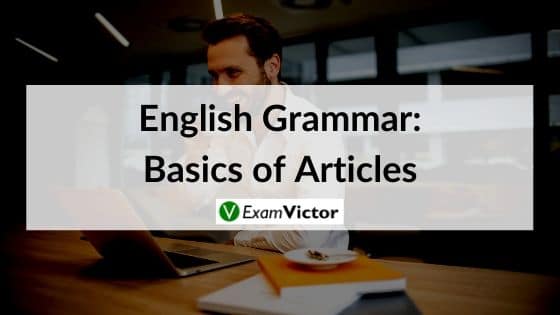 In this lesson, we will explore three very small but important words in the English language: the articles a, an and the. Articles in English grammar are words that you use in almost every sentence that you speak or write. Learn about the significance of articles, when to use them and some examples.

An article is a word used to modify a noun, which is a person, place, object, or idea. Technically, an article is an adjective, which is any word that modifies a noun. Usually, adjectives modify nouns through description, but articles are used instead to point out or refer to nouns. There are two different types of articles that we use in writing and conversation to point out or refer to a noun or group of nouns: definite and indefinite articles.

Let’s begin by looking at the definite article. This article is the word ‘the,’ and it refers directly to a specific noun or groups of nouns. For example:

Each noun or group of nouns being referred to – in these cases freckles, alligator, and breakfast burrito – is direct and specific.

Indefinite articles are the words ‘a’ and ‘an.’ Each of these articles is used to refer to a noun, but the noun being referred to is not a specific person, place, object, or idea. It can be any noun from a group of nouns. For example:

In each case, the noun is not specific. The Mercedes could be any Mercedes car available for purchase, and the event could be any event in the history of the world.

Specific identity is known: Use the definite article with any noun (whether singular or plural, count or non-count) when the specific identity of the noun is known to the reader, as in the following situations:

Additional Information Regarding the Use of Articles
When indicating an unspecified, limited amount of a count or non-count noun, use some.
My cousin was seeking some advice from a counselor (not advice in general or advice about everything, but a limited amount of advice).

Through this blog post, we have provided the necessary details about Articles. Definition, Types and Rules related to Articles are clearly mentioned for easy understanding.
For more English related posts, click on the links below.
Adverbs
Adjectives
English Preparation

Also, let us know your suggestions or reviews in the comment section below.