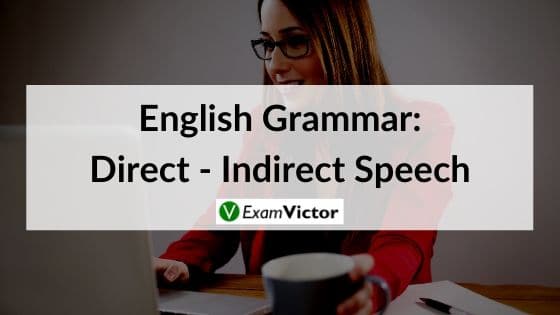 In this blog, we are explaining the topic ” Direct-Indirect Speech

The English Language has two ways to narrate the spoken-words of a person. These two ways are as follows:

These two ways are usually used to convey a message (spoken-words) of one person to another person. For example, you are at your college. Mr. David, who is your teacher, says to you, “I want to meet your parents’. When you come to the home, you will inform your parents in the following two ways:

Difference between Direct and Indirect Speech

Direct Speech: Direct speech repeats, or quotes, the exact words spoken. When we use direct speech in writing, we place the words spoken between quotation marks (” “) and there is no change in these words. We may be reporting something that’s being said NOW (for example a telephone conversation), or telling someone later about a previous conversation.

Rule #1: Adverb of time and place
If the reported sentence contains an expression of time, you must change it to fit in with the time of reporting, and adverb of nearness should be put into those of distance. In this blog post, we have defined Direct & Indirect Speech, mentioned the key differences between the two and have systematically listed the rules related to Speech.
If you would like to check some more posts related to English, click on the links below.
Subject of a Sentence
Adverbs
Articles
English Preparation